We had another broken water main flood in West Hollywood, this time at WeHo City Hall, 8300 Santa Monica Boulevard, corner of Sweetzer Avenue and Santa Monica Boulevard around 6:30 a.m. The water gushed onto the boulevard, forcing a lane closure. and a water outage at the City Hall building, according to the Los Angeles Department of Water and Power (LADWP) worker who was directing traffic to a single lane. 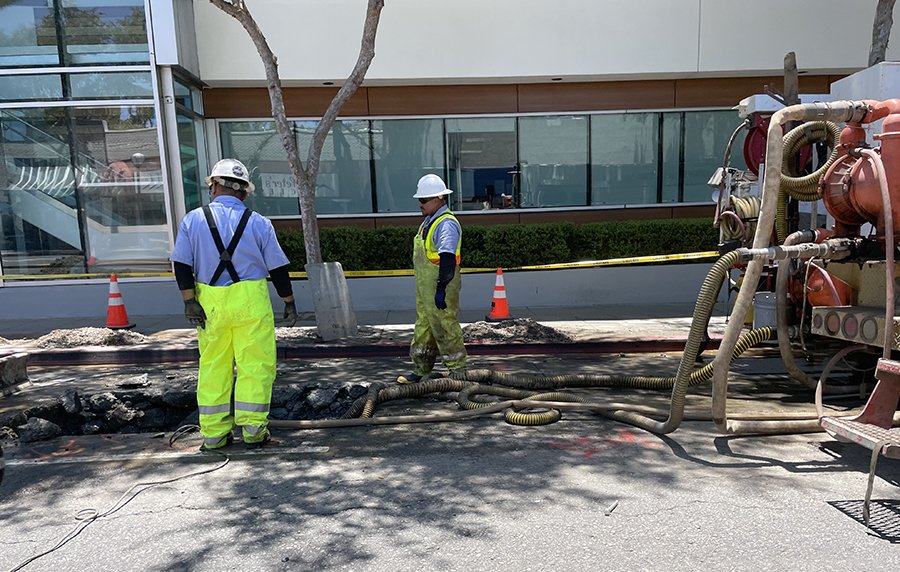 This is the second broken water main in West Hollywood in less than a week. A broken water main in the alley behind the Heart WeHo nightclub gushed water onto San Vicente Boulevard at the intersection of Santa Monica Boulevard, flooding the area around the Progress Rainbow crosswalks in the heart of the LGBT neighborhood Rainbow. Water and dirt covered the intersection and some community members needed help to get through the flooding this afternoon.

We had yet another broken water main at @WeHoCitythis time in front of City Hall on Santa Monica Blvd and Sweetzer Ave pic.twitter.com/bJKAbvRQBI

While workers said the water was shut off at City Hall, nearby businesses were unaffected by the main water main break and carried on with business as usual. Joey’s Cafe across the street was busy, as well as Hamburger Mary’s as LADWP workers repaired the broken water pipe.

The City of West Hollywood announced earlier this month that new water conservation rules from the Los Angeles Department of Water and Power (LADWP) are now in effect. All LADWP customers – residential and commercial – are now limited to outdoor watering two days a week along with other water use restrictions. LADWP customers with addresses ending in odd numbers can water on Mondays and Fridays and customers with even addresses can water on Thursdays and Sundays, before 9 a.m. or after 4 p.m. New LADWP rules prohibit watering between the hours of 9 a.m. and 4 p.m. on any day.

The new LADWP restrictions also include two recommended practices: the use of pool covers to prevent evaporation and washing vehicles in commercial car wash facilities. Hand watering is permitted daily before 9 a.m. and after 4 p.m. if the hose has a self-closing water shut-off device.

Limit outdoor watering with sprinklers to eight minutes per station on permitted watering days
Sprinkler watering using water-saving nozzles for up to 15 minutes, twice a day, on permitted watering day
No water should flow from the property
No water should leak from any pipe or fixture
No watering within 48 hours of a measurable rain event
No watering the driveway or sidewalk
No washing vehicles with a hose without a self-closing nozzle
More information on the new watering days is available at www.ladwp.com/wateringdays.