A downtown Sudbury bar says it is taking steps to increase the safety of its patrons after a woman said her drink was spiked over the weekend.

Megan Matchem is one of the owners of Boulevard Nightclub on the corner of Durham Street and Larch Street, formerly known as the SRO.

Matchem told CTV News in an email that the club reopened under new ownership in March.

Over the weekend, a woman reported that her drink had been spiked by two unknown women who approached her and her friend on the dance floor.

“As my friend and I were dancing, two girls also came onto the dance floor. As a (woman), I don’t usually consider other women a threat, so I put my drink on the ledge near out the window, within reach (stupid I know) and started dancing,” she said in a social media post.

“One of the two women approached my friend and I and started chatting with us. I believe it was the distraction mechanism that made me turn away while the other woman was drugging my When the girl went back to her friend’s house I grabbed my glass and took two sips. Within minutes I couldn’t stop sneezing, my nose started running like crazy and my eyes were crying.

She also detailed that her eyes and throat started to swell and her hand/arm started to feel numb.

In the post, she said her friend took her to the hospital where she was told she was having an allergic reaction to suspected date-rape drugs.

Matchem said no staff were briefed on the situation on Saturday night and the club currently does not have cameras.

Sudbury Police are investigating the incident and the woman has contacted the club through social media to see if they have any information to help her, she said.

Matchem said that in addition to the bartenders, every night two of the club’s three owners are at the establishment and bouncers are posted at the entrance and roam the bar.

Anyone who feels uncomfortable at any time or sees anything suspicious is asked to inform one of the staff immediately.

“Every issue will be taken seriously and not dismissed,” she said.

Drink lids have been ordered, the bar owner said, and the club hopes to receive them by next weekend.

“We have been in contact with the board members of #knowhumantrafficking of Ontario, we are working on an event to raise awareness Sudbury in the hope that people will take the time to educate themselves and take this seriously. They have provided tools to be able to train our staff so that they can spot it in the future as well,” Matchem said.

Spiking someone’s drink is illegal and is considered a “crime against the person” and may be reported to the police.

The nightclub posted these safety tips on its Facebook page on Monday:

Tips for a safe night out (The Nightclub) 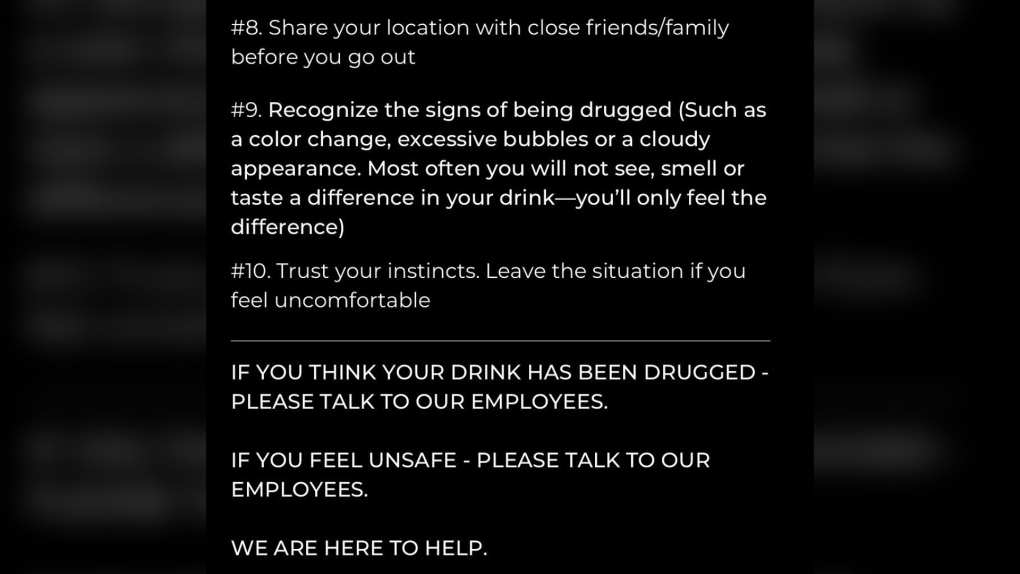